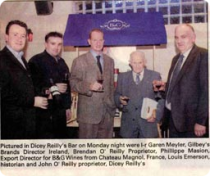 Colour photo of Barton & Guestier Export director Phillipe Maison along with Ballyshannon historian Lucius Emerson and others representing the wine trade. Photo was taken at a reception for the B & G representatives, 20/11/2003 in “Dicey Reilly’s”, Ballyshannon.

Colour photo of Barton & Guestier Export director Phillipe Maison along with Ballyshannon historian Lucius Emerson and others representing the wine trade. Photo was taken at a reception for the B & G representatives, 20/11/2003 in “Dicey Reilly’s”, Ballyshannon.

In November 2003, Ballyshannon welcomed Mr Philippe Maison, and representatives of the renowned winemakers, Barton & Guestier. Local historian, and former President of the Donegal Historical Society the late Lucius Emerson, described the history of the "Wild Geese", or Irish emigrants to France and Spain, of whom the Bartons were among the most famous, and about how wine was the drink of choice in medieval Donegal. Tom Barton of Curraghmore, Fermanagh, and descended from a Lancashire family, married Margaret Delap of Ballyshannon in 1722. The marriage gave rise to one of the most famous dynasties ever to come from Ireland, and which still exists in the Bordeaux region of France.

In 1723 "French Tom" Barton and his wife left for France, where he worked as an overseer in a Marseilles vineyard. By the age of thirty, he had established his own wine business in Bordeaux. He exported wine and brandy in exchange for wool, salmon, beef and leather. In 1754 he made several acquisitions of lands in Donegal, including the Fethard Estate in Tipperary, and later Straffan House in Kildare and Glendalough House in Wicklow. In France, by 1774, the Bartons were a well established family in the Bordeaux region. It was during the French Revolution that the name Guestier became associated with that of Barton as wine merchants. The "Reign of Terror" engulfed Bordeaux as much as it did Paris and other French cities, and many were imprisoned or sent to the guillotine. Tom's grandson Hugh Barton, who was then head of the Barton firm, was imprisoned along with many other leading merchants. He escaped from prison before fleeing the country. As an alien he was no longer allowed to hold property in France or have a business there, so he arranged with Daniel Guestier to manage his business in Bordeaux, while he managed its affairs in Britain. Barton placed great trust in Guestier, for at any time Guestier could have seized the business for himself. Eventually when some degree of normality returned, a partnership was formed between them in 1802 which continued between their descendants until the firm was sold in recent times.

As with other Irish traders on the Continent, the Bartons supplied a home market of wealthy landlords and merchants, and in the case of Ballyshannon, the important military presence in the town. With an infantry barrack and a cavalry barrack there was a large circulation of money in the locality, and under the patronage of the officers large quantities of port, sherry, claret and brandy were imported. These Irish migrants who became involved in the loquor industry became known as the "Wine Geese". 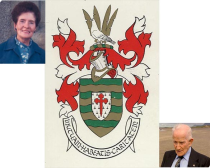 Photographs of the late Kathleen and Lucius Emerson, Ballyshannon, two of the longest serving members of the County Donegal Historical Society

Photographs of the late Kathleen and Lucius Emerson, Ballyshannon, two of the longest serving members of the County Donegal Historical Society

Archibald Murray is the earliest known of the extensive locally-based merchants to supply these markets. Before banking came to the town money remittances were made by the purchase and transfer of bills of exchange, which were obtained by the remitter from some outside party, and seldom represented the exact sum to settle the transaction. Consignments of wine from Bordeaux and elsewhere were occasionally paid for in kind by a return cargo of butter and grain. It was not until 1835 that the Provincial bank of Ireland established the first bank in Ballyshannon.

Throughout their history, the Bartons never forgot their Irish roots. A descendant, Robert Barton, was a close friend of Michael Collins, and was also related to Erskine Childers, who, in 1922, was executed by firing squad for his part in the Irish Civil War. The Barton & Guestier partnership continued until 1952, when the company was sold to a multinational company. In 1874 they sold their remaining shares and started their own wine label. However, they are still closely connected to the B&G label.

Mr Emerson outlined the tradition of trade that Donegal had with the wine producing regions of France, going back at least to the fifteenth century. In Donegal, the ruling O'Donnells were known as the "Kings of Fish" for their trading of salmon for wine with France. Bordeaux was the main port of call for Ballyshannon shipping.