Buildings of the Countryside

In the eighteenth century, the legislative circumstances that made Roman Catholicism a forbidden religion limited the extent to which the Church could erect permanent places of worship. A simple thatched hall, without any overt reference to its function other than a gable cross and pointed windows, was typical of the subdued response to the penal atmosphere of this period. The pointed arch, long seen as a symbol of salvation, was central to the Gothic style and given full expression in the churches of each Christian denomination. The style was also favoured because it provided some sense of historical continuity with earlier foundations. 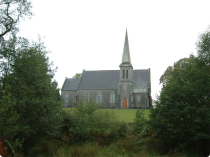 This large church in Killevan, Co. Kilkenny designed by Joseph Welland in 1857 departs from the conventional hall and tower type of preceding decades.

This large church in Killevan, Co. Kilkenny designed by Joseph Welland in 1857 departs from the conventional hall and tower type of preceding decades.

There are a number of eighteenth-century Roman Catholic churches still surviving that remain modest architectural achievements. One of the earliest is the neat whitewashed chapel at Grange, County Louth, built by Thaddeus Gallagher in 1762 as a simple hall, with the altar placed centrally on the long E wall. It was later extended to form a T-plan. At Kildoagh in County Cavan, the date of 1796 is confirmed by the simple pointed sash windows of the south wall, with simple flowing Y tracery. In the nineteenth century, many rural churches acquired greater elaboration, often in the form of cut stone gable fronts.

The same simplicity is evident in the Gothic halls built for the Presbyterian Church, with well-preserved examples from the mid-eighteenth century at Corboy in Longford, and two later examples in Monaghan at Derryvalley and Cahans. A shared feature between numerous churches of the Methodist, Presbyterian and Catholic faiths is the arrangement whereby the minister's or priest's residence was accommodated as an appendage under the same roof

The provision of residential accommodation in churches can be traced to mediaeval times. In the chapel at Scotstown the priest's house is provided in a substantial projection of the east wall.

.
The Church of Ireland enjoyed a privileged position as the official Church of Government. From 1787 onwards, with annual funds from Parliament, it began an extensive building programme that was to continue into the nineteenth century, covering the countryside with familiar hall and tower churches with sparse Gothic detailing. Typical examples built in this period are represented by the parish church, dominated by a tall, square tower, with each stage defined by a string-course and upper belfry identified by tall, louvered windows. After 1843, Joseph Welland designed or altered many of the churches as architect to the Ecclesiastical Commissioners. The influence of Pugin is revealed in the marked shift away from the conventional hall and tower form toward a more wilful irregularity. This is immediately apparent where the building is treated as a collection of separate components, such as tower, nave, chancel and porch, each individually expressed to reveal its function. The Gothic Revival

The exposed timber roof of Killevan Parish Church is a common feature of the designs of Joseph Welland, the architect to the Church of Ireland.

was particularly responsible for offering greater encouragement and recognition to the skills of artisans, particularly stone carvers.

Associated with these churches, though by no means common, mausoleums represent a more ambiguous architectural style that usually results in striking and pure architectural forms. Amongst the most arresting of these miniature buildings are the mausoleums at Kinnitty and Castlerickard, which are extraordinary pyramids that rise out of the churchyard like some Egyptian imposter.

Country churches, like this example near Kingscourt are amongst the most simple and evocative buildings of the Irish countryside.

The provision of residential accommodation in churches can be traced to mediaeval times. In the chapel at Scotstown the priest's house is provided in a substantial projection of the east wall.

The three-sided pyramid of the Swifte mausoleum at Castlerickard.