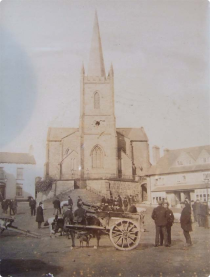 The development of towns in the nineteenth century was dependent on regular markets and fairs, like at Clones in County Monaghan

The development of towns in the nineteenth century was dependent on regular markets and fairs, like at Clones in County Monaghan

While the Irish Parliament had achieved some economic and legislative autonomy before the end of the eighteenth century, the French-inspired egalitarian ideals of the United Irishmen brought the century to a tumultuous close, in the form of the 1798 Rebellion. This resulted in the passing of the Act of Union in 1801 and the end of an imperfect independence. The foundations for the prosperity of the early nineteenth century had been laid in sustained economic growth from 1760 to 1815.In that time, Irish exports increased dramatically, assisted greatly by the Napoleonic wars. Despite the appalling consequences of the Great Famine for most of the impoverished population, there was remarkable building activity in Ireland throughout the nineteenth century.

Catholic Emancipation brought with it the rise of a new middle class, which developed its businesses, provided growth in the banking sector and helped to create suburban life. The Catholic middle classes also financially supported the often-bold architectural statements of its newly liberated Church. Much of the building activity of this period offers evidence of a new emphasis on social responsibility, with the provision of schools, hospitals, workhouses and prisons. There was unprecedented investment in infrastructure, with the extension of the waterways system and the introduction of the railways, bringing with them evidence of the industrial age and exciting new forms of architecture.

The greater variety of architectural styles in the nineteenth century reflects how, in the middle of the century, architecture was increasingly the focus of academic argument, led in particular by the English ecclesiastical architect A.W.N. Pugin. Classical architecture, while still widely employed, was challenged by a new architecture, based less on interpretation of styles than on principles that promoted the fundamentals of buildings as structures, where mediaeval Gothic  was held up as the ideal model. The search for a new architectural style in the nineteenth century focused largely on new
materials and was central to the development of the modern architecture of the twentieth
century.

Previous - The Eighteenth Century
Next - The Country House