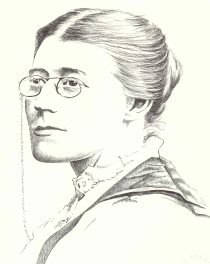 An early realisation of how arduous the struggle was going to be is revealed in the caustic sub-title of an article in the Sligo Champion covering a suffrage meeting arranged by Constance and Eva whose suffrage society was only the third in the country outside Dublin in 1896.

While recuperating from illness in Italy in 1896 Eva was introduced to Esther Roper, herself recovering from suspected consumption. Esther, who, though of working class origins - a huge deterrent without taking into consideration the fact that she was a woman - had been to university and had taken a degree in history, was to prove an enormous inspiration to Eva and became her lifelong partner. She persuaded Eva to accompany her back to Manchester where she worked amongst impoverished women.

In Manchester Eva had a family connection. Her great uncle Henry Gore-Booth lived in nearby Salford and worked among the poor. There she saw first hand the conditions, in which the factory workers lived and worked. She became passionately interested in women's rights and both Esther and herself became actively involved in the trade union movement. Esther was credited with inspiring the Suffragette movement to widen its crusade for the vote to all women, not just those of property, in this way hugely increasing it's potential political power.

Article From The Sligo Champion

Article From The Sligo Champion -