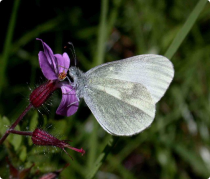 Photograph of a Wood White butterfly feeding on a Herb Robert. This butterfly has semi translucent white colour.

Photograph of a Wood White butterfly feeding on a Herb Robert. This butterfly has semi translucent white colour.

Wood White is a species that is on the wing in May and June along woodland rides and paths such as those in the Raven Wood. It has also been seen on the edges of the slobs along hedgerow rides and is certainly locally common.

It is our smallest white butterfly and has a particularly weak flight and the unusual habit, for whites, of nearly always resting with its wings closed. The adult never flies far and only lives for about two weeks.Eggs are laid singly on the food plant, which is normally bird's-foot trefoil

The eggs hatch between ten to 20 days after laying. The caterpillar feeds for about a month before changing into the chrysalis stage, where it remains for the following ten months.

Previous - Small Tortoiseshell
Next - Flora of the Wexford Sloblands and Harbour