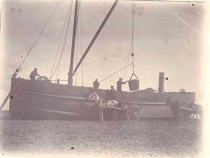 1895 sepia photo of a boat moored at Moville, Co Donegal. Four men on board are unloading a cargo on to two horse-drawn wagons.

1895 sepia photo of a boat moored at Moville, Co Donegal. Four men on board are unloading a cargo on to two horse-drawn wagons. 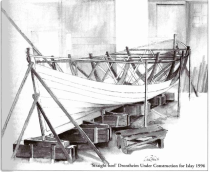 Partially-constructed drontheim. Sketch shows the skeleton of the boat resting on wooden frames.

Partially-constructed drontheim. Sketch shows the skeleton of the boat resting on wooden frames.

As part of the greater Ordnance Survey project of the 1830s, the "Printed Statistical Enquiries on the coast fisheries in Lower Moville" revealed that "whilst in some places we find the inhabitants of the coasts fishing with ardour and perseverance, at all times and in all seasons, in others, as in some parts of Ireland, they only flock to the ocean.when the periodical arrival of large shoals…. kindles a momentary enthusiasm."

However, the fishermen of Moville appeared to be "constant", or dedicated fishermen, as opposed to " periodical" (i.e., those who fished only in season, and were principally farmers). According to the Survey, in 1835 there were about 600 fishermen in the parish of Lower Moville, and no scarcity of fish.

A type of fishing vessel unique to this area was the "drontheim" which may have been imported from Norway ( "Drontheim" in Norwegian). They were once built all around the north Irish coast. According to Donal Mac Poilin, in his book "The Drontheim: forgotten Sailing Boat of the north Irish Coast", "the keel was constructed in five main sections, keeping the vessel as light yet as strong as possible. It was also deeper at mid-point, a feature which had a simple and very practical reason-eminently practical when boats had to be manoeuvred on narrow beaches and rough coastal paths. Described by one owner as "a boat with a gurnard head and a mackerel tail", they were called yawls in the Donegal Bay area. Their oars were usually 14ft to 16ft on a 20ft boat, while the 25ft carried 18ft oars. Only the MacDonald family who once built drontheims in Greencastle are left. Today they still make wooden clinker-built boats in Moville. The modern descendants of these now carry diesel engines, net-haulers, and all the modern paraphernalia of modern fishing".