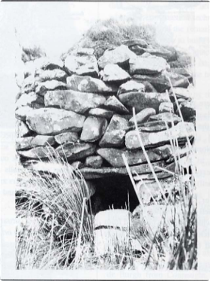 The remains of a sweat house, Lecamy, Moville, Co Donegal

The remains of a sweat house, Lecamy, Moville, Co Donegal

Located on the Moville to Carndonagh road, on the side of a hill and situated behind a farmhouse, stands "Lecamy sweat house." The structure remains perfectly intact, and is beehive shaped, approximately 2 metres in height.

Its uses in the past were the equivalent to the modern-day sauna; i.e., the relief and cure of rheumatic disorders, the added bonus being in that in times past it was also reputedly a cure for temporary madness.

A great turf fire was lit inside until the building became heated like an oven; when the fire had burned out, the ashes were cleared, and the opening was blocked off. The blanket-wrapped patient sat inside on a bench of sods to "sweat it out". Afterwards, he crept out and plunged into cold water, finally rubbing himself warm. After several such treatments at intervals of a few days, the sufferer commonly was cured.

The exact date of the construction of sweathouses is unknown, but they were used from the earliest times to the early C19.