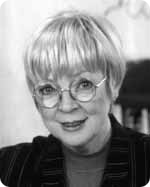 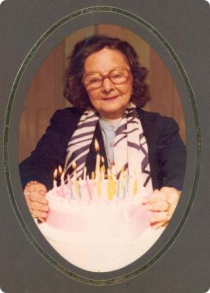 Biddy White-Lennon unveiled a special commemorative plaque to the late Annie D'Alton (née Mulhall) at 3pm on Sunday 2nd September, 2007 at the Bridewell Lane entrance to Shaw's of Carlow.

Annie rose to national prominence in the long running TV serial 'The Riordans' which ran from 1964 to 1979 in which she portrayed the character of Minnie Brennan the village gossip, and busy body of Leestown.

Annie was born in 3 Bridewell Lane in 1903, one of 12 children of MaryAnn and Davy Mulhall. She attended the Presentation Primary School and Brigidine Boarding School, Tullow. She showed great talent as a singer and stage performer.
Annie joined Dobells Travelling Theatre Company when she was only 13 and rose in the company to produce plays. She shared the Carlow stage with Jimmy O'Dea and gave Milo O'Shea his first job.

After the death of her first husband (Louis D'Alton) in 1951, Annie remarried John Cowley in 1953. Many relatives of Annie's still live in her beloved home town where she came to rest after her death in March 1983, aged 80 years.

May she rest in peace