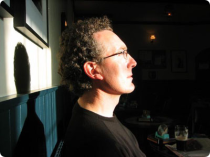 Portrait of David Donohue. Before David wrote "Walter Speazlebud", a highly acclaimed story for children, he had been successful in the world of film and music.

Portrait of David Donohue. Before David wrote "Walter Speazlebud", a highly acclaimed story for children, he had been successful in the world of film and music. 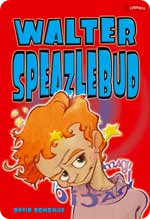 Image of the cover of book Walter Speazlebud written by David Donohue. Published by O'Brien Press.

Image of the cover of book Walter Speazlebud written by David Donohue. Published by O'Brien Press.

Before David Donohue wrote "Walter Speazlebud", a highly acclaimed story for children, he had been successful in the world of film and music.

He graduated from Waterford School Of Art in 1983, having successfully completed a National Certificate in Graphic Design and Fine Art. David worked as a freelance graphic artist for some years following his qualification and taught Graphic Design in the Printing Trade School on Park Ave in New York from '86 to '87. David also worked as a freelance correspondent in New York for Hot Press Magazine, NME and Melody Maker. He interviewed, among others, James Brown, Lou Reed, Paul Simon, David Bowie, John Cage, Philip Glass and Laurie Anderson.

In 1988 David produced his first feature-length documentary, "Put Blood In The Music", a quirky look at the New York downtown music scene of the late eighties featuring Sonic Youth and John Zorn. Directed by renowned experimental filmmaker Charles Atlas, "Put Blood In The Music" was the first Irish documentary to be shown on "The South Bank Show". It was broadcast world-wide and heralded as a milestone in experimental music-documentary making.

More documentaries followed including "Words For The Dying", which he part-directed as well as co-produced. It features the composers John Cale and Brian Eno and documents the recording of an orchestral and vocal album in Russia, Wales and London. It won the 'best documentary' award at the 1991 Ontario film festival. Returning to Ireland, David directed documentary footage for U2, Gavin Friday and Luka Bloom, among others, and co-directed, "Three Moons- a portrait of John Rocha", with Jim Sheridan. His association with Jim Sheridan continued when David worked as script-reader, and later as music-consultant on "The Boxer" and music supervisor of "In America".

In 1993-94 David worked as producer director on the RTÉ Arts programme "Opening Nights" creating a five minute section for each programme covering a cross section of the Arts, from contemporary dance to sculpture, architecture, peformance art and film-making. In 2001 David was the series creator of the six-part BBC 2 documentary series "Turf Wars". It was filmed over six months and follows the fortunes of a horse-racing trainer, Jessica Harrington, through the national hunt racing season. He has also appeared on T.V. on the arts programme "The View" and on RTÉ Radio's "Rattlebag".

In 1994 David won an Arts Council Script Award of 5,000 pounds to allow him to write his short film script 'The Evenings.'

In 1992 he embarked on a songwriting and recording career which has, to date, yielded three highly critically acclaimed albums under the moniker "The Floors", plus a song in the Michael Scott directed Hollywood movie, "Dangerous Heart". He has also co-written with Marianne Faithfull, John Parish, Maria Mc Kee, Katell Keineg, Sonic Youth and Lydia Lunch and is currently co-writing with Irish singer/songwriter/performer Jack L.

With his knowledge of the worlds of film and music, it was inevitable that David would be asked to work as a music supervisor for film. His first project was the Irish movie "Accelerator", directed by Vinnie Murphy. For this project David assembled a stellar cast of contemporary musicians, producers, DJ's and composers. David has recently finished music-supervising Jim Sheridan's feature film "In America".

David's first childrens story, 'Walter Speazelbud,' is published by O'Brien Press and has become a best-seller in Ireland. It was nominated as 'book of the month,' on RTÉ's Arts Programme "Rattlebag" and was chosen as the Christmas Book Choice on the "Late Late Show".

During the last year David has appeared on Den T.V, the "Rattlebag" Arts Programme and visited many schools and libraries around the country. David's readings are essentially workshops, based around the idea of spelling backwards and the power of using your NOITANIGAMI.

David is currently completing the follow-up novel, entitled "Moon Man", an adventure with Walter Speazlebud. David is also currently developing a script of his novel "Moon Man". His co-writer is the Oscar nominated scriptwriter/filmmaker Kirsten Sheridan.