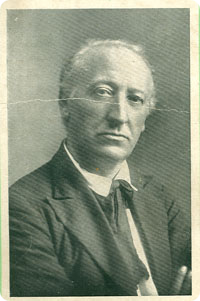 Val Vousden was the stage name of Bill McNevin who was born at College Street, Carlow. He died 6 June 1951.

Val Vousden was the stage name of Bill McNevin who was born at College Street, Carlow. He died 6 June 1951. 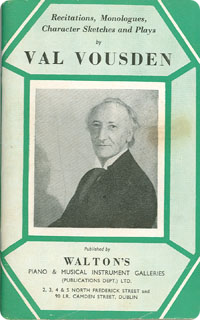 Recitations, Monologues, Character Sketches and Plays written by Val Vousden. Val Vousden was the stage name of Bill McNevin who was born at College Street, Carlow. He died 6th June 1951.

Recitations, Monologues, Character Sketches and Plays written by Val Vousden. Val Vousden was the stage name of Bill McNevin who was born at College Street, Carlow. He died 6th June 1951.

Carlow actor, poet and playwright Bill MacNevin (William Francis Maher MacNevin) was born in College Street, Carlow in 1886. More commonly known by his stage name Val Vousden, he had his debut stage appearance at the age of six as Tiny Tim in "A Christmas Carol" in 1891 before progressing to other small productions under the tutelage of Julia Kelly.

He attended the local Christian Brothers National School before continuing his education at Mungret College, Limerick for a period before leaving to join the Royal Engineers as a clerk. However, the dramatic life pulled him in once more and he joined a drama troupe, calling himself Bartley Hynes and touring around Ireland and England. In 1910 he returned to Carlow appearing in the "Penny Readings" in Deighton Hall on Burrin Street and producing a sketch called "Art and Laughter" in the Town Hall the same year before once again leaving his beloved Carlow and touring with the Carrickford Repertory Company until 1914.

With the outbreak of World War 1 in 1914, he joined the army and saw service in France rising to become Regimental Sergeant Major of the Welsh Regiment. He then returned to Ireland and joined Roberto Lena's company in Newbridge followed by a season with the Queens in Dublin. By this time he had adopted the stage name Val Vousden. He spent the following three years with the O'Brien and Ireland Company and worked with notables such as Abbey actress May Craig, P.J. Bourke of Bourke's Costumiers and Peader Kearney the future author of the National Anthem. He married Pearl O'Donnell, a Belfast actress in Derry and they toured the country for many years performing together. They had three daughters, Sheila, Mona and Patricia.

With the launch of the radiobroadcasting era in Ireland he presented the very first light entertainment show and continued to be a regular contributor to Irish radio until he died. Val gave elocution lessons in many schools and colleges and also wrote his autobiography entitled "Val Vousden's Caravan

Val Vousden was the stage name of Bill McNevin who was born at College Street, Carlow. He died 6th June 1951

", which is a humorous account of his experiences as an actor. Although this was his most famous literary achievement he also penned numerous plays, poems and sketches published in a collection called "Recitations, Monologues, Character Sketches and Plays". He was a regular in the Abbey Players based in the Abbey Theatre in Dublin. Val also appeared in a number of films including the silent movie "Irish Destiny"(1926), a love story set during the War of Independence in which he played the role of a priest. "Captain Boycott", "Uncle Nick" and "The Odd Man Out" also feature Val in various film roles.

He died in Clonskea Hospital, Dublin on June 6th, 1951 and was buried in Glasnevin cemetery with his funeral attended by many noted colleagues and admirers.

On June 19th, 2004 a special event was organised by John McDarby and held in the George Bernard Shaw Room of the Library to commemorate the 50th anniversary of Val Vousden's death. Members of Val's family attended and many local people participated in a remembrance of his life, a recitation of his works and a screening of the film "Irish Destiny". The use of the Shaw Room in the library as a venue was apt as it was where he used to serve mass, beside where he grew up and on the same street where he went to school.