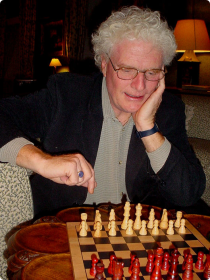 Sean Hardie was born in Northumberland in l947. He joined the BBC as a Graduate Trainee in l968 and worked for ten years as a Producer/Director in TV Current Affairs on 24 Hours, Panorama and Newsnight, covering assignments throughout Europe, the United States and the Middle East.

In l979 he moved to comedy to co-create and co-produce (with John Lloyd) 'Not The Nine O'clock News ', the programme which introduced Rowan Atkinson, Mel Smith and Griff Rhys Jones to British television. In the early eighties he also helped launch the careers of among others Rik Mayal, Robbie Coltrane, Peter Capaldi, Jim Broadbent, Peter McCarthy and Tracey Ulman, and wrote and directed for Spitting Image. Other TV work includes six series of Channel 4's BAFTA- winning Bremner Bird and Fortune (writer/director/programme consultant), BBC2's The State We're In (writer/director/script editor), The Lenny Henry Show (BBC 1, director) , the Barry Devlin/Sean Hughes adaptation of Flann O'Brien's The Signal Box (RTE, director) and has written and directed a number of award-winning films for Video Arts (writer/director) .

He has also worked with and written for John Cleese, Billy Connolly, Prunella Scales, Dawn French, Jennifer Saunders, Clive Anderson, Tony Robinson, Paul Whitehouse , John Fortune, John Bird, Celia Imrie, Timothy Spall and Angus Deayton. In addition to BAFTA his work has won the Silver Rose of Montreux, a US Emmy, and awards from among others the United Kingdom Writers Guild , the Broadcasting Press Guild and the New York and Chicago Film Festivals.

After a period as Head Of Entertainment for BBC Scotland he moved to Ireland in l985 to concentrate on writing, since when he has published three well-received novels: : 'The Last Supper' (Michael Joseph/ Sphere/Simon and Schuster - 'energy-charged, nervy...calculated to grip until the last gulp' - The Guardian - ' an efficient and slyly humorous thriller...original and convincing' - Time Out - 'Such a light touch does not come easy' - The Times) ; 'Right Connections' (Michael Joseph/ Penguin - 'topical, bright and often very funny,' - Mail On Sunday , 'sharp-witted documentary grit' - Sunday Express - 'Speedy, fizzy, credible and confident' - The Times) ;and 'Till The Fat Lady Sings' (Michael Joseph/ Penguin - 'within hailing distance of Graham Greene' - The Observer; 'an excellent thriller with a subtle comic touch' - Sunday Times).

He has contributed articles and columns for the London 'Independent' and the London 'Times', designed and tutored a number of TV and Film script courses for Screen Training Ireland, written a commissioned screenplay, 'The Emerald State', for Channel 4, worked with the comedian John Cleese and the psychologist Guy Claxton on a TV series based on Claxton's book 'Hare Brain, Tortoise Mind', and is writing a non-fiction book for Harper Collins about social and cultural change since the Second World War. He has taught and run workshops on creative writing and the imagination both in Ireland and at the Paris WICE summer school, and is currently Writer In Residence in County Carlow. He's married to the poet and novelist Kerry Hardie , and has lived for the past twenty years in Skeoghvosteen, on the border between Counties Kilkenny and Carlow.