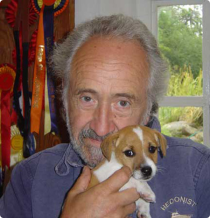 Mim Scala born in London in 1940. He was highly influential in the world of music and film liasing with pop and rock legends.

Mim Scala born in London in 1940. He was highly influential in the world of music and film liasing with pop and rock legends.

Before Mim Scala wrote "Diary of a Teddy Boy: A Memoir of the Long Sixties" he was highly influential in the world of music and film liasing with pop and rock legends and living a life full of adventure.

He grew up in the Northend Road Fulham, before emigrating to the Kings Road. He then travelled extensively before settling down to work as a theatrical agent. In 1963 he founded the theatrical agency, "Scala Browne Associated" with Sir William Piggott-Brown representing actors, directors and musicians including Limerick's own Richard Harris, Cat Stevens, Benito Caruthers and Jim Browne. He also packaged the film "Sympathy for the Devil" with Jean Luc Goddard and the Rolling Stones.

In the late sixties he took off to live in the Moroccan Sahara, Spain, Sri Lanka, and Switzerland, painting and recording ethnic Music, including the dervish sect Ganoua from Tangiers. He returned To England in 1972 to work as head of promotion for Island records. Mim produced the first direct to disk album for the band Warsaw Pact, before founding "ESP Music and Management", an agency which represented record producers, Chris Kimsey of the Rolling Stones and Stuart Levine producer for Simply Red and B.B. King.

Mim Moved to County Carlow in 1987 to write, paint and fish. In 2000 Mim Publish the highly acclaimed social history of the long sixties "Diary of a Teddyboy".

Mim lives in the shadow of Mount Leinster with his wife Janie and their son Emilio Fred.