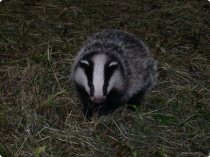 Photograph of a Badger at dusk on Begerin Island

Photograph of a Badger at dusk on Begerin Island

Badgers are common throughout the area and are essentially nocturnal. They are instantly recognisable by their white face with its vertical black stripes. Their coat consists of a mixture of black and white hairs.Shallow scrape marks in the ground and tracks can often indicate where badgers have been foraging.
Badgers live in groups in their den or sett, which normally has between three and ten entrances. A sett is a system of tunnels with play and sleeping areas. The sett contains chambers with bedding of straw, bracken, grass and leaves which are in plentiful supply on the lands of the Wexford Slobland.

The badger is an omnivore and eats small mammals, birds, eggs and vegetable food. Earthworms are a favourite part of their diet. They will raid bees' hives for the honey they contain.

Badgers normally mate during February and March and young are born the following year. The litter is usually three cubs.

If badgers are threatened, they are able to puff themselves up to look bigger than they really are and can move at a surprisingly rapid speed.

Drawing of Badger foot prints in negative - black on white.

Previous - Bats - The Pipistrelle Bat
Next - The Common Lizard