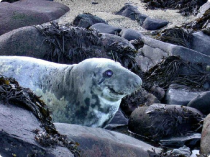 Photograph of a Grey Seal close up on the beach in Wexford harbour.

Photograph of a Grey Seal close up on the beach in Wexford harbour.

The grey seal is common all around the Irish coastline and a familiar sight in Wexford Harbour. Coat colour is variable, with the bull (male) having a black to mid-grey coat which is normally darker than the cow (female) who has a lighter and spotted coat.

The grey seal has a very healthy diet and normally feeds on fish, crabs and lobsters.

Seals are mature at six years but do not normally breed until their tenth year. They spend most of their life in the sea but breeding mostly takes place on small rocky islands in breeding colonies known as 'rookeries'. Dominant bulls have 'harems' of about ten cows and breeding takes place in late autumn when the bull finds a suitable site.

Pups are born in September or October, with one pup per family. The grey seal has a more pointed head than the common seal who has a more cat-like face and their young are dark in colour.

Drawing of a Gray Seal paw and movement marks.

Previous - The Common Lizard
Next - The Irish Hare