Heywood Gardens once formed part of the surroundings of Heywood House, which unfortunately is no longer standing. The house was built in 1773 by Frederick Trench and eventually was transferred to State ownership in 1993. It has two distinctive garden landscapes. 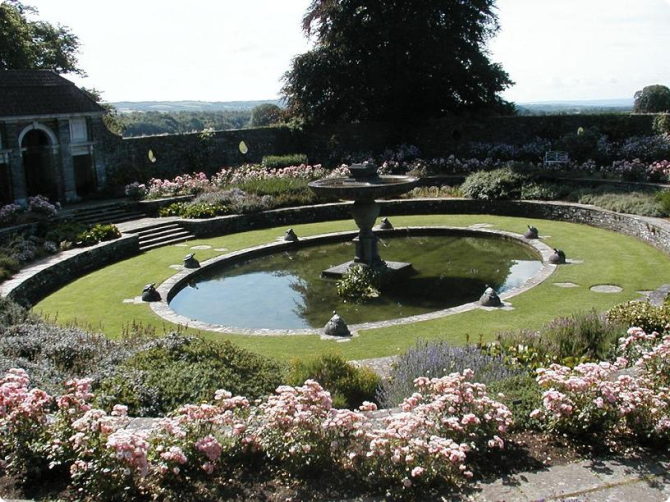 Trench landscaped the great park between the house and Ballinakill late in the 1700s. It is characterised by lakes, trees and follies. A new addition to the garden was created in the early 1900s by the renowned architect Sir Edward Lutyens and was probably landscaped by Gertrude Jekyll. These formal gardens are generally recognised one of the best surviving examples of Lutyens’ work in Ireland. Other examples of his work in Ireland include the War Memorial Park, Lambay Island and Howth Castle. Together with the spectacular views across the countryside, the Heywood Gardens create quite a romantic setting.

Gash gardens started out life as a walkway to the River Nore behind Noel Keenan’s farm yard. In 1989 Keenan began to create the four acre colourful, wild garden landscape that is in full bloom today at Gash. Following in Keenan’s footsteps, the avid development of the garden is continued by his daughter Mary.

The Moon House Grotto is one of the main attractions of the garden. Streaming over a rockery is a waterfall that races past a circular window of the grotto before plunging into a lily pond below. Herbaceous and alpine plants are tucked in along winding pathways that form a bridge across to a stream garden. Some plants that stand out at Gash include Persicaria Virginana, also known as ‘painter’s palette’, geraniums and a laburnum tunnel. A large rock garden, heath garden, rose beds and collection of trees and shrubs all feature in the garden.

Abbeyleix has been the home to the de Vesci family since Lord de Vesci’s magnificent house was built in 1774. However, the area was previously the site of a Middle Ages Cistercian Abbey. Indeed, this is how the area became known as ‘Abbeyleix’. Lord de Vesco’s garden is said to be the location of the Abbey, although this is difficult to ascertain with confidence.

The River Nore flows through Abbeyleix Gardens following a meandering, snake-like course. The area is well known for its population of fine trees and primeval woodland, which is covered with a carpet of bluebells during the springtime.

Formal terraces were added to the garden landscape during the 19th century. These were inspired by terraces at the Villa Aloupka along the shores of the Black Sea. Rows of yew hedges and a central fountain adorn the terraces, offering views of the parklands stretching out from the house.