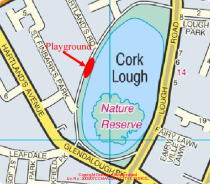 A map of the Lough showing the location of the playground.

A map of the Lough showing the location of the playground.

Cork Lough is a shallow, freshwater limestone lake that is situated to the south-west of Cork city centre. The average depth of the Lough is one metre at both the north and south basins, and is a total area of 4 hectares. It is a well known and important wildfowl area. Many birds take refuge at the Lough, where there is a large population of Swans.

The Lough is also popular for coarse angling. Each year, the bulk of Irish Carp are caught in this lake. The Lough is also habitat to a number of other fish such the Eel, Tench, Perch and Rudd.

The island in the centre of the Lough provides shelter for numerous species of wildlife, attracting many nature lovers.

In 1881, the Lough was declared a Public Wildlife Refuge and is one of Ireland’s oldest protected areas. 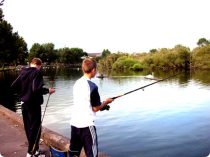 Carp Fishing at the Lough

Carp Fishing at the Lough 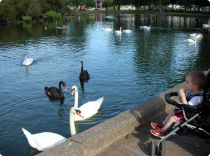