Ardagullion Bog and Brown Bog, situated near Edgeworthstown and Longford Town respectively, are excellent examples of a number of bogland habitats that are protected under the EU Habitats Directive: active raised bog, degraded raised bog, and rhynchosporion. They are protected as a Special Area of Conservation (SAC).

Active raised bogs are areas where peat is still actively forming and there is widespread cover of bog mosses. Spots that are particularly dominated by Sphagnum Moss are known as Sphagnum Lawns. Conversely, boglands that have been badly damaged by peat cutting amongst other land uses are referred to as degraded raised bogs. Typical vegetation associated with raised bogs is found both at Ardagullion Bog and Brown Bog, such as Ling Heather, Hare’s-tail Cottongrass and sedges. 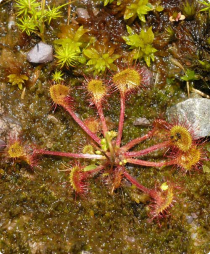 Rhynchosporion is a rare habitat within Europe that is associated with raised bog, blanket bog and wet heath in the lowlands of central and western Ireland. The habitat consists of communities of exposed, humid peat where strips of vegetation occur. Species characteristic of a rhynchosporion habitat include Round-leaved Sundew, Great Dundew, Common Cottongrass, Bog Asphodel and a variety of mosses and sedges, many of which are supported at Ardagullion Bog and Brown Bog.

A community of trees and scrub have laid claim to old cutover areas of Brown Bog, mainly Downy Birch, Scots Pine, gorse and Purple Moor Grass. Close-by is a woodland area where rowan and beech can also be found. Areas along the edge of Ardagullion Bog are for the most part dominated by Downy Birch.