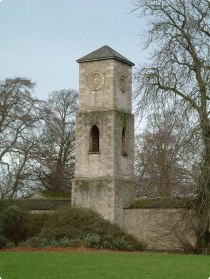 Marlay House itself was built in 1794 by David La Touche, who extended the original house. Therefore, some parts of Marlay House are almost 300 years old. Adjacent to the main courtyard is a walled garden of four acres. The landscape of the estate is typical of the late 18th century which was heavily influenced by the famous landscape gardener Capability Brown. Brown’s designs concentrated on the natural undulations of the landscape rather that formal gardening.

Marlay Park is also the official starting point of the Wicklow Way, a 132km walking trail that meanders through the Wicklow Mountains to County Carlow. The park itself consists of an area of over 200 acres including extensive sports facilities, woodlands, grasslands, hedgerows and lakes.

This variety of habitats makes Marlay Park an excellent wildlife resource. The woodland areas support a huge population of insects, while masses of butterflies are present in the spring/summer period. Other animals that can be found in the park include squirrels,foxes,hares, field mice, bats, badgers and hedgehogs. All of these animals can find plenty of food and shelter in the expansive park area.