Clew Bay lies along the west coast of Mayo within a drumlin landscape, formed from glacial sediment deposited at the end of the last Ice Age. There is a wide variety of habitats within the Clew Bay area, including many that are protected under the EU Habitats Directive, for example Atlantic salt-meadows, marram dunes, large shallow bay and embryonic shifting dunes. 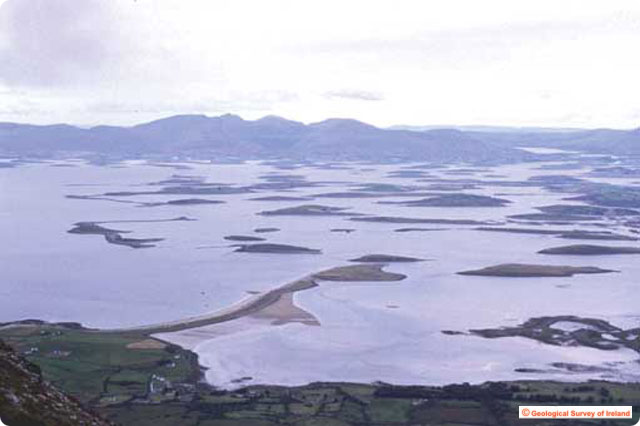 Drumlins in Clew Bay, Co. Mayo
Copyright of the Geological Survey of Ireland 2006.

The shingle reserves at Clew Bay are also considered to be the most important in Ireland. Some of the characteristic vegetation of the shingle drift lines includes Red Fescue, thrift, Sea Campion and Sea Mayweed.

The varied habitats support many different flora and fauna species. A number of rare marine species have been recorded in Clew Bay such as the stalked jellyfish lucernariopsis cruxmelitensis , which has eight arms and up to thirty-five tentacles on each arm. Clew Bay is known to support important populations of otter and Common Seal, both of which are protected under the EU Habitats Directive.