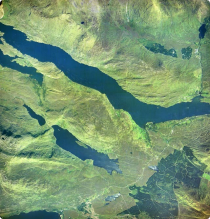 An aerial view of Killary Harbour, Ireland's only fjord. It forms a partial border between Galway and Mayo.

An aerial view of Killary Harbour, Ireland's only fjord. It forms a partial border between Galway and Mayo.

Killary Harbour winds its way to the sea for 16 km. It is best known as one of only two fjords in Ireland, the other located at Carlingford Lough which forms part of the border between the counties of Louth and Down. Killary Harbour forms part of the border with Co. Galway, and the Mweelrea Mountain, the highest in Co. Mayo, lies on its southern shore.

The sheltered Killary Harbour fjord is an important sanctuary for birds, with nationally important populations of many species. Ringed Plover, Mute Swan, Whooper Swan, Mallard Duck, Tufted Duck, and Barnacle Goose are some examples. Otters, a protected species, are known to breed in the water at Killary Harbour.