National Committee for Commemorative Plaques in Science and Technology 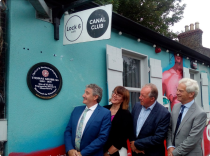 Unveiling of the plaque to Thomas Grubb

Unveiling of the plaque to Thomas Grubb

The brief of the Committee is to promote public awareness of Irish contributions to science, engineering, medicine, technical education, economics, and exploration both nationally and internationally. To achieve this, the Committee erects plaques commemorating persons in these fields that were either born in Ireland, or who made their major contributions whilst working in Ireland. The plaques contribute to raising public awareness of the importance of this significant part of Irish heritage. Since the foundation of the Committee in 1997, over 70 plaques have been erected across Ireland. There are roughly 200 more candidates which have been identified by the Committee as potential recipients of such recognition.

Past chairs have included Prof. Patrick Wayman and Dr Ronald Cox, with members including Dr Con O’Rourke, Dr Gerry Wardell, and Dr Ian Elliott. The Committee includes a representative from Women in Technology and Science (WITS). 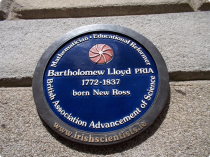 Plaque to Bartholomew Lloyd at the Tholsel, New Ross

Plaque to Bartholomew Lloyd at the Tholsel, New Ross

The initial plaque was designed by Danny Osborne with the spiral motif as a universal symbol of science, technology, engineering, and mathematics. Since 2008 the plaques have been produced by Terry Cartin with a refreshed design.

During the past decade, the National Committee has erected over seventy plaques to commemorate those who have achieved national or international eminence in science, engineering, education or exploration. A number of these of plaques are being devoted to commemorating the significant contributions of women to the national scientific and engineering traditions of the country. These plaques are being commissioned in association with WITS (Women in Technology and Science) 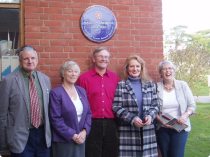 Unveiling of the plaque to Matilda Knowles

Unveiling of the plaque to Matilda Knowles

Locations of plaques include:

- the entrance of University College Galway (George Johnstone Stoney, the man who named the electron);

- on buildings named in their honour (George Gabriel Stokes on the Stokes Building in Sligo Institute of Technology and Edward Conway, on the Conway Institute Building, in University College Dublin);

- on country houses (Maria Edgeworth, for her pioneering educational work and her father Richard Lovell Edgeworth for his work in engineering, both in Edgeworthstown);

- in public parks (John Tyndall and Nicholas Vigors in the Memorial Park in Leighlinbridge, Co. Carlow);

- beside canals and harbours (Thomas Grubb at the site of his famous optical engineering factory on the Grand Canal in Dublin and Alexander Nimmo at Roundstone Harbour, Co. Galway);

- on family homes in Dublin (Ernest Shackleton, the internationally famous explorer at his former residence in Marlborough Road, and John Boyd Dunlop in Ailesbury Road in Dublin);

- in hotels (Anne Jellicoe, in Buswell’s Hotel in Dublin, the building in which she founded the Queen’s Institute for Women, the first technical education institute for women);

- at historic locations (William Molyneux’s plaque is in Crow Street, Dublin, the site of the first meeting of the important Dublin Philosophical Society).