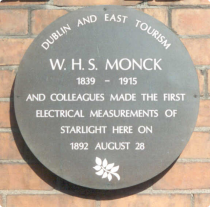 William Henry Stanley Monck, astronomer, was born at Skeirke, County Laois. He was educated at Trinity College, Dublin where he excelled in science and ethics. He was called to the Bar in 1873. From 1878 to 1882 he was Professor of Moral Philosophy in Trinity and wrote An Introduction to Kant's Philosophy and Introduction to Logic.

On retirement, Monck bought a 7˝-inch Alvan Clark refractor and set it up in his Dublin back garden. In August 1892, using photo-voltaic cells made by G. M. Minchin, he and his neighbour S.M. Dixon made the first electrical measurements of starlight. In 1894 he suggested that there were probably two distinct classes of yellow stars, one dull and near and the other bright and remote. This clue to the existence of dwarf and giant stars was taken up later by J. Gore of Sligo.

Monck published widely in the current journals and has been judged to have been 'a brilliant amateur astronomer'. In 1899 he published an Introduction to Stellar Astronomy which was based on updated versions of his previous articles in the periodical Popular Astronomy.