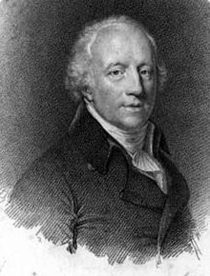 Richard Lovell Edgeworth, educational writer and engineer, was born on 31 May 1744 in Bath, the only surviving son of Richard Edgeworth, of Edgeworthstown in County Longford. In 1764 Richard Lovell married Anna Maria Elers by whom he had a son Richard (b.1764) and a daughter Maria (the authoress). In 1769, on the death of his father, Edgeworth inherited the family estate at Edgeworthstown. Following his first wife's death, Edgeworth married Honora Sneyd and, after her death in 1780, married her sister Elizabeth. Elizabeth Edgeworth died in 1797 after a long illness and on 31 May 1798, Edgeworth married Frances Anne Beaufort (1769?1867), eldest daughter of Daniel Augustus Beaufort, the Irish topographer. There were children from each of the marriages.

Richard Lovell Edgeworth had a highly inventive mind and wrote many articles on scientific and mechanical ideas. When in the 1790s, a French invasion of Ireland was rumoured, Edgeworth revived any earlier idea for a telegraph and presented them to government, but all were rejected. Later, 1803, a number of signalling stations were erected between Dublin and Galway under the supervision of Edgeworth's brother-in-law Francis Beaufort RN, and efforts made to train signallers. However, the experiment was a failure due to bad weather and a code of signals that proved far too difficult for the uneducated signallers.

In 1811 Sir John Sinclair consulted Edgeworth about the evidence presented to a commission on broad wheels to decide whether cylindrical or conical wheels were the more damaging to road surfaces. This led Edgeworth to publish in 1813 An Essay on the Construction of Roads and Carriages, which became popular as a practical manual. This included a description of a road-building system similar to that later associated with the name of McAdam.

Richard and Maria's interest in child education resulted in a number of publications, the first Practical Education (1780) (printed but not published), being followed in 1808 by Professional Education, which bore his name but was written largely by Maria.

In 1814 Edgeworth's health began to fail, but in the next two or three years, although seriously ill, he managed to complete a final series of wheel-carriage experiments for the Dublin Society. He died at Edgeworthstown House on 13 June 1817.